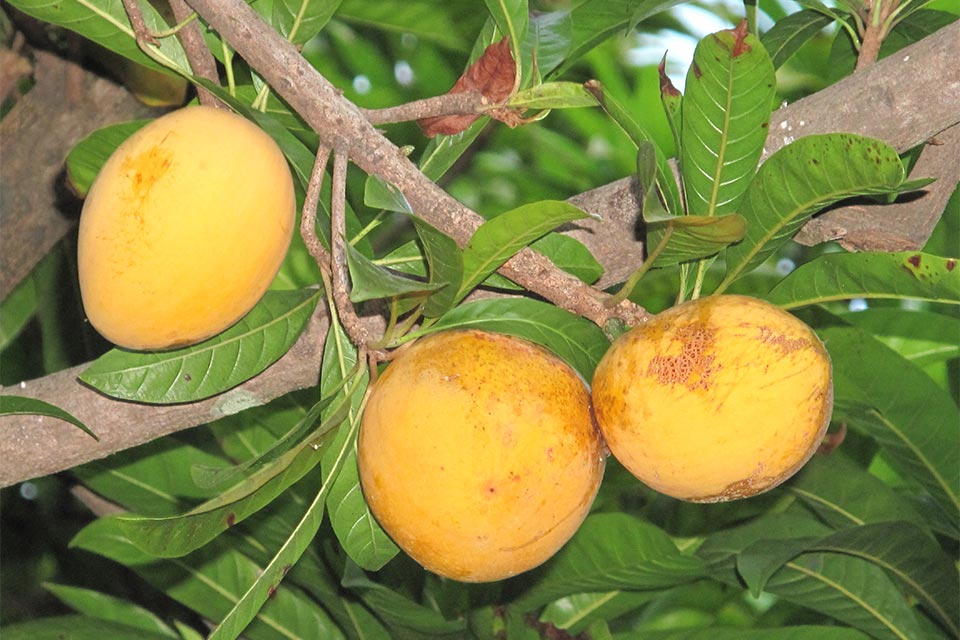 The canistel - Pouteria campechiana called มอนไข่ (mon khai, moon egg [1]) Is a tree whose height does not generally exceed eight meters, but it can, in favorable situations, reach a height of thirty meters and its trunk a diameter of one meter. Its bark is brown furrowed with an abundant amount of white and gummy latex [2]. 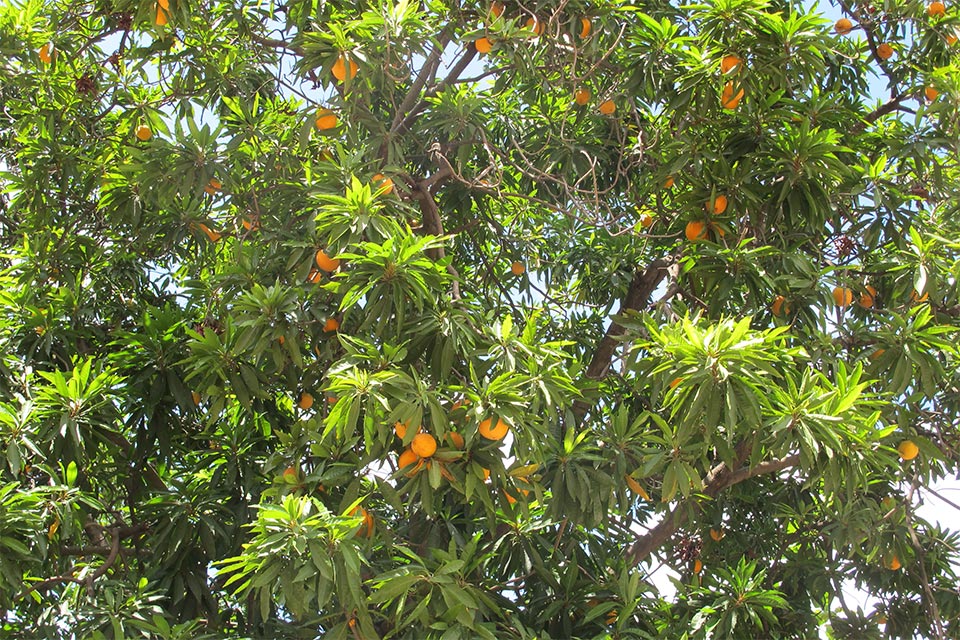 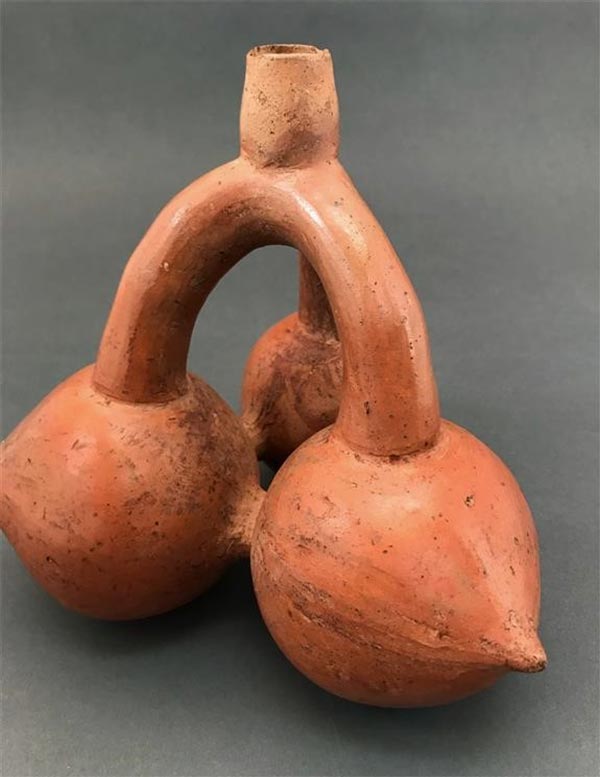 The canistel is said to have originated in Belize, Guatemala, Salvador and southern Mexico. It is found in plantations in many countries of Latin America and West Indies. It is believed to be one of the first fruit species cultivated by the Incas as evidenced by pottery from the Viru culture. [4]. 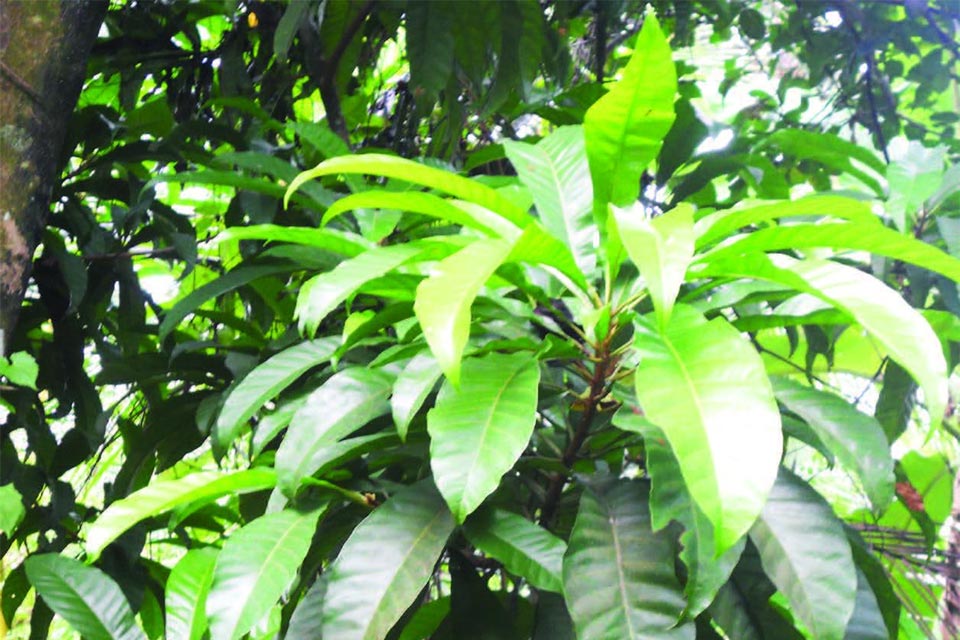 Its leaves are grouped in the form of bells. They are quite long and narrow of a raw green. 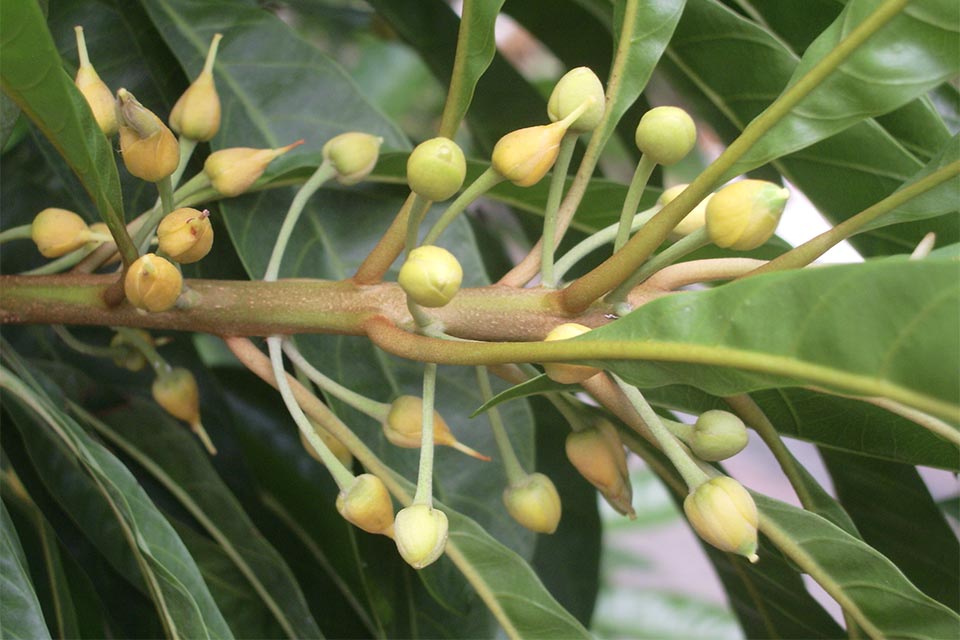 Its flowers are greenish in the shape of an elongated bell. They give birth to fruits of very varied forms. 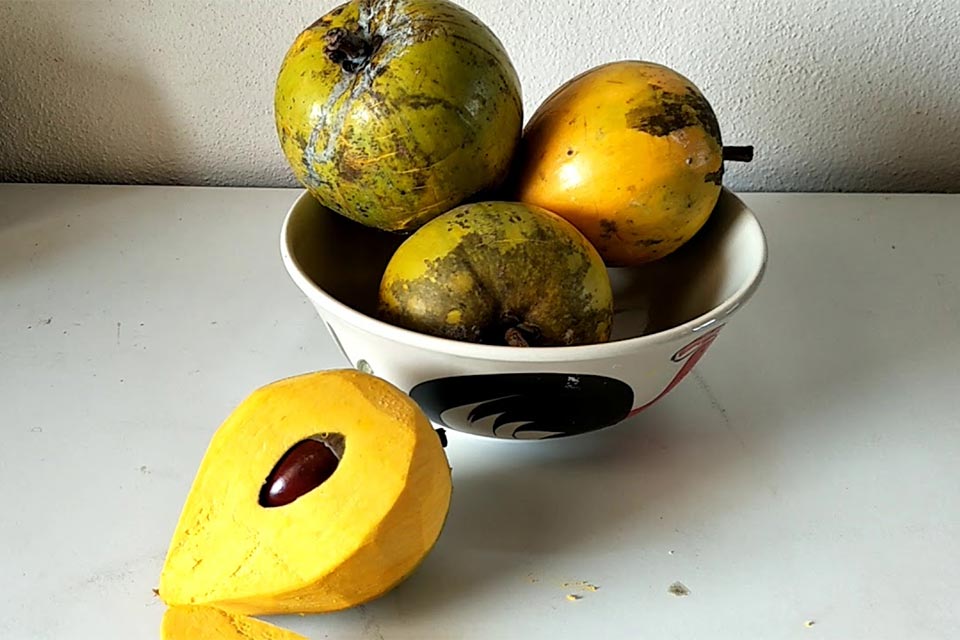 The fruit is harvested when its skin turns yellow before it cracks. The pulp is reminiscent of egg yolks because of its color and mealy dry texture. Its sweet, slightly musky flavor can evoke kaki [5]. The fruit is eaten raw is used for jam, marmalade, ice cream ... In Florida, it is eaten salty and peppered, certainly with ketchup and mayonnaise;). In some Latin American and Caribbean countries it is seasoned with lemon or lime juice. In Thailand, fresh fruits eaten raw, can also be used to make desserts such as cakes, custard, jam, jelly, pancakes or baked. 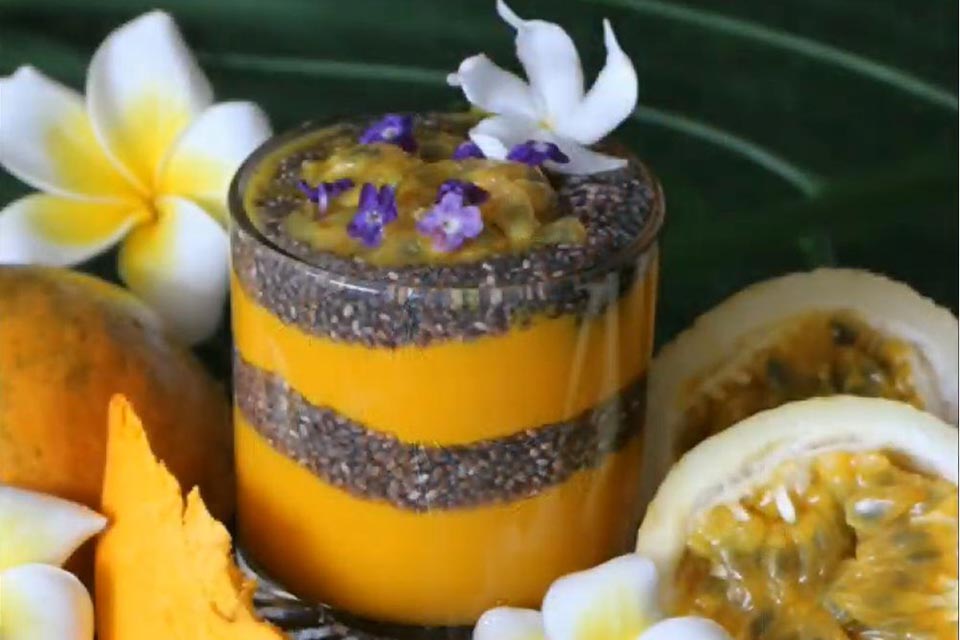 The canistel has a good content of minerals and vitamins.

It is rich in niacin [Niacin (nicotinic acid) is a component of the vitamin B3 with its amide, nicotinamide, (niacinamide). Vitamin B3 is sometimes called vitamin PP for pellagra preventive. The pellagra is due to a deficiency in this vitamin.]] And carotene which gives it its color with a good amount of vitamin C.

In Cuba, a decoction of canistel bark is used for rashes; nuclei for ulcers; fruits to cure anemia [6].

In Mexico, an astringent decoction of bark is used for fevers, as a remedy for coronary heart disease, liver disorders, epilepsy, skin diseases and ulcers [7]

[1] Khai it is the egg, mon could be the alliteration of the English word moon.

[2] The latex should not be confused with the sap. Latex is a more or less thick liquid, produced by plants and fungi (including lactarians - Lactarius). Often milky white, sometimes transparent or colored, the latex is often glutinous and coagulates with the air, turning into an elastic material, like that of the rubber tree (Hevea brasiliensis) which is used to manufacture natural rubber or that of the sapotillier ( Manilkara zapota or Achras sapota) which is used to make natural chewing gum. The sap ensures the distribution of water, mineral salts and carbohydrates. The latex is involved in the defense mechanisms of the tree. It circulates in a separate network of sap vessels, the laticiferous channels. Like pine resin, it oozes during an injury and forms a coagulating protection.

[3] Pouteria campechiana is also known as yellow sapote, egg yolk (in Réunion, where it was introduced in 1983 by the CIRAD - Center for International Cooperation in Agronomic Research for Development The species is present only in the cultivated state.

[4] Viru Gallinazo culture developed on the northern litoral of second-century Peru BC to 4th AD It takes its name from the site of Virú where the population gallinazo implanted its administrative and religious main center. Despite its geographical extension and its long presence along the Peruvian coast, the Viru culture has remained in the shadow of important archaeological research devoted to the culture of Moche almost contemporary. Their geographical proximity makes their styles mingle, and many experts leave aside the early development of this same population Gallinazo, yet essential to understand the refinement of Les Moche. In addition, the beginnings of the Viru culture merge with the end of the Salinar culture, from which they inherit many characteristics. Viru ceramics are usually red, with incisions and white painted patterns. Negative patterns obtained by the application of black pigments are also observed. The traditional forms are vases with stirrup handles, shaped bottles in the shape of fruit, face or animal, and double receptacles united by a bridge handle. It is the Viruses who invented the huacos, vases-portraits often recognizable in their almond eyes, which will be taken back and brought to their perfection by the Mochicas. In metallurgy, this is the beginning of gold and copper alloys all along the coast. During the 3rd century, the Viru culture is increasingly influenced by the Moche culture which is a little further north, and will eventually go out to make room for it.

[5] Persimmon or Korean plaquemine or Chinese plaquemine, or sometimes figue caque, is the fruit of persimmon of Japan (Diospyros khaki) , of the family of Ébénacées.

In Thailand, the leaves are used to treat scurvy, the seeds the wounds in purulent, the bark early to treat the fever, the rashes ...

In Central America, the latex extracted from the tree can be used as chicle (chewing gum) like that of the sapotillier. In the 1970s, a derivative of the nucleus was studied for its activity against seborrheic dermatitis of the scalp. The study did not succeed because of lack of means to obtain enough product.

The wood can be used in construction and cabinet making. It resistant, hard and heavy. Quality planks and rafters are made. 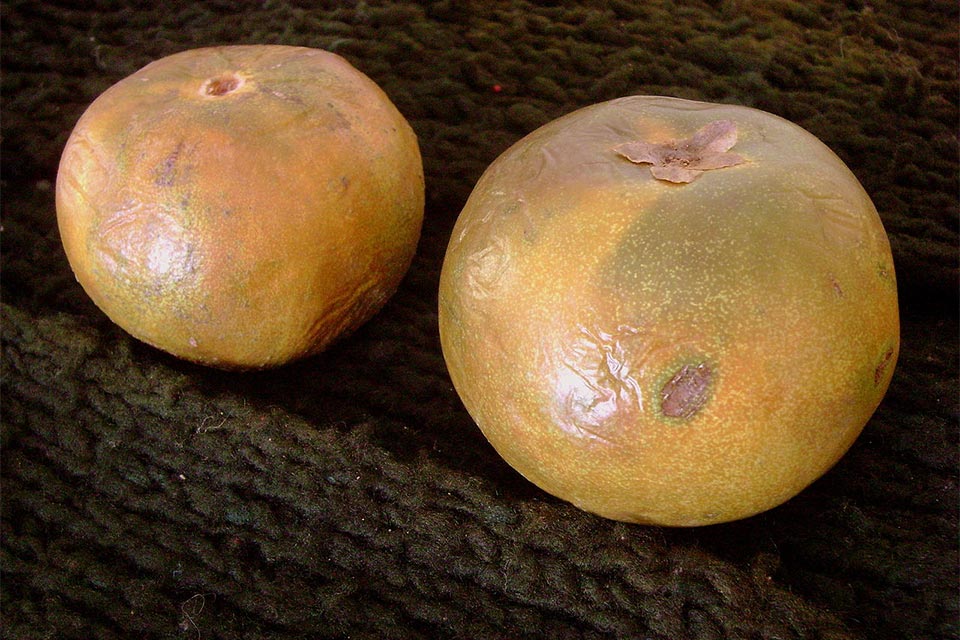 ) because of the appearance of the fruit. It is sometimes called

, an appellation that transliterates the word lucuma [[Lekima served, at the request of Vietnam, to name a typhoon Lekima who devastated the Tonkin on March 10, 2007, causing more than 50 deaths and 15 missing and about the destruction of 6 000 homes and 52,000 flooded and / or damaged.

4.  Erawan & swim and bath with elephants