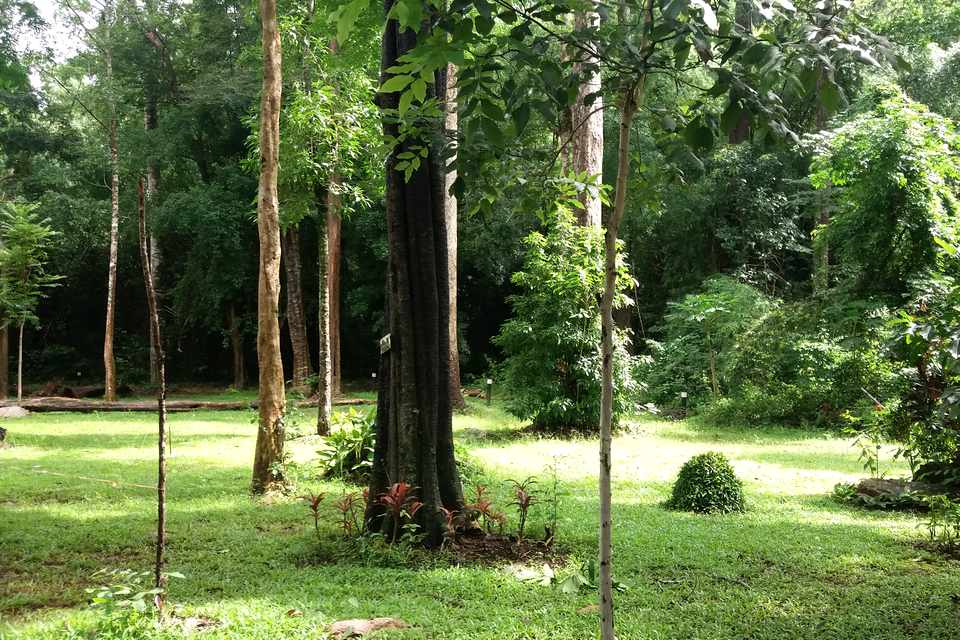 Chaloem Rattanakosin National Park or Tham Than Lot Chaloem National Park (อุทยานแห่งชาติ เฉลิม รัตนโกสินทร์) is the smallest park in Kanchanaburi province  [1]. Its main features are lush forests, steep limestone mountains, waterfalls and mysterious caves. Since February 1980, it has been part of the 17 national parks of Thailand and covers an area of 59 km <2>. The wooded limestone mountains of the park are the watershed of the Mae Klong River. The highest peak in the park is Kam Paeng Mountain, which reaches 1,260 m.

Most of the area consists of tortured limestone mountains with the highest peak Kam Pang, which rises to about 1,260 meters above sea level. The mountain is the source of the Mae Klong river.

The climate in this region is quite hot with 1,146 mm. of rain a year. The highest temperature is about 37 to 38 ° C from March to April, and the lowest is around 17 to 18 ° C from December to January. The park is almost entirely covered by the evergreen forest, which means that always remains green or always blooming. This term corresponds to the adjective "persistent" in common language. Dry, deciduous forest with some forest areas of bamboos. There are several kinds of animals in the park, like leopard, banteng [2], Gaur [3], the deer, the gibbons with white hands and the monkeys.More than 60 bird species have been recorded from the park, Eastern hornbill [4], francolin [5], blue and red tickell flycatchers [6] and Barbets Coppersmith [7].

A particular type of animal is the

[2] The banteng or tembadau (Bos javanicus) is an ox relatively small wild that lives in Southeast Asia. In the form of Bali beef, it has been domesticated by humans and introduced to Australia where it forms an important maroon population.

[3] The gaur (bos gaurus), is a herbivorous animal also known as Indian Bison and is part of the family Bovidae. He is the biggest and the most dangerous of all. Its weight reaches 1,500 kg and it measures two meters at the withers. The gaur looks like a buffalo, but it has much more rare hair. His legs below the knee are yellowish white.He lives alone and approaches herds when it is time for rutting. Ferocious struggles engage.The Gaur drives away the elephant and even the tiger. An oily secretion with a strong odor covers his back, allowing him to sneak into the thickets bush without trouble.Called กระทิง - (gra thing) it is known by the drink grathing daeng in Thai and

Red Bull ® in the world.

[4] The Eastern hornbill oriental pied hornbill (lagenorhynchus anthracoceros)) is a species of hornbill in the family Bucerotidae.

[5] The francolin pearl (francolinus pintadeanus) is a Galliform bird of the family phasianidae.

[7] The barbu with red breastplate (megalaima haemacephala) is a species of bird belonging to the family of {{}} megalaimidae.

4.  Erawan & swim and bath with elephants